Interview with Alex, Matt and Mike of 3 Hours Later

By Sebastian ArciszewskiJuly 14, 2020No Comments
5 New Podcasts To Listen To Each Week - Subscribe to Find That Pod

I featured the 3 Hours Later Podcast in Edition #39 of the newsletter. And given how many podcasts I listen to and sample these days, it’s a testament to the quality and ingenious format of 3 Hours Later, that it’s stuck around as permanent fixture in my podcast player of choice.

3 hours later is a show developed and hosted by three friends who generally accept a new challenge each week to try something new for at least 3 hours. It can be a video game, a TV show, a book or even a board game. The main conceit is that they try to simply answer one question about the piece of culture they are sampling. Is it worth it?

Here’s my interview with Alex, Matt and Mike: 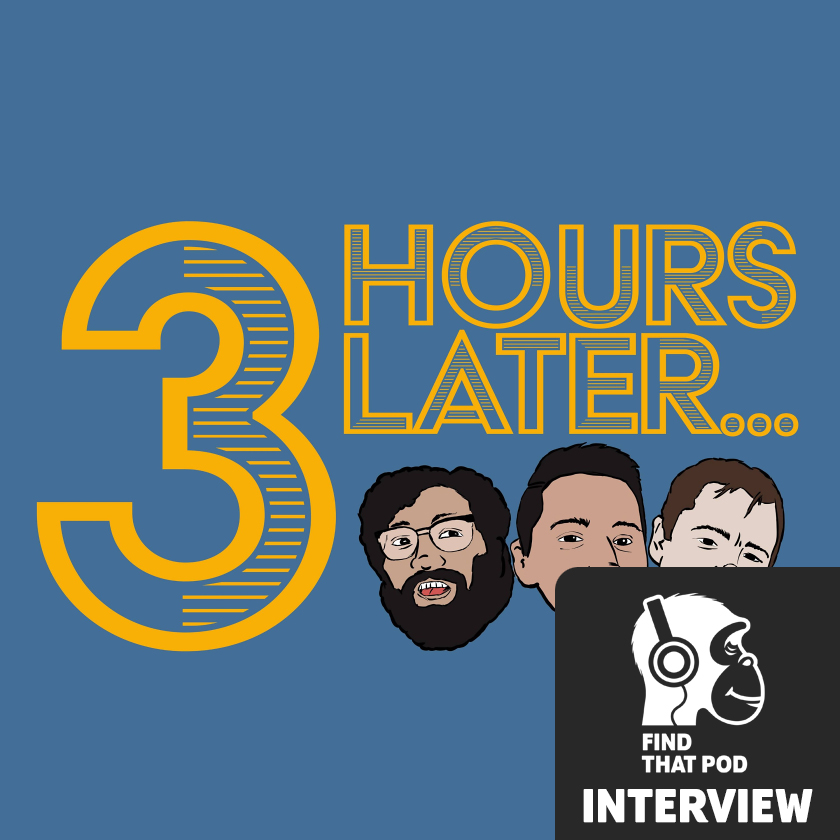 Why did you start the Three Hours Later Podcast?

3 Hours Later: We are 3 friends: Alex, Matt and Mike, who met while working at a retail store. Several years passed, as Matt and Alex both left retail, but we continued being friends on Facebook until one fateful day Mike posted a Facebook post about shows getting too much attention, specifically Game of Thrones. A few backs and forth on what content should be highlighted when it was suggested we do a podcast! We are currently over a year producing our podcast with 4,000 plus followers on Twitter and almost 60 episodes released.

Tell me about your process and the things that go into producing each episode?

3 Hours Later: Each host takes turns suggesting a “challenge” of the content we should review for a minimum of 3 hours and then later we come back to our microphones and talk about our review and if it is worth your time!

What have been the most challenging aspects of producing the show?

3 Hours Later: Time. Three working adults. Alex is pursuing his Master’s degree and a 4-year-old. Mike still works retail so it really does depend on that availability; next to impossible during holidays!

3 Hours Later: Honestly, what started out as a fun hobby to do has become an outlet for all of us to talk with like-minded individuals with the reassurance of positivity we have received.

Do you ever think about the lasting impact of your podcast? What would you want it to be?

3 Hours Later: The lasting impression is that there is so much content in this world, expand your horizon. Even the episodes where one doesn’t like the challenge going into it, there’s always a good takeaway that’s authentic and kind towards the challenge. Expanding our own mindset while we continue to do episodes.

3 Hours Later: We promote through all main social media: Facebook, Instagram and Twitter. They all serve different purposes. Facebook connects us to our friends and family. Instagram connects us with potentially new listeners but the hardest to capture. Twitter has been great for overall networking with both new fans and networking of different podcasters.

Here are a few tips, some might seem silly but here you go:

What do you think the future of podcasting holds? More walled gardens like Spotify and Luminary or open RSS feeds?

3 Hours Later: Podcasts, like other entertainment platforms, are going to be based on open source, wide content and exclusive offers. It is in the same timeframe as eSports and competing platforms. Every major group will have their baseline users but with “exclusive” offers to hopefully pull people to one platform or another. As the platform evolves we will get a mix between the two and eventually there’s a winner.