Interview with Mark Linsenmayer of The Partially Examined Life

By Sebastian ArciszewskiSeptember 8, 2020September 9th, 2020No Comments
5 New Podcasts To Listen To Each Week - Subscribe to Find That Pod

I featured The Partially Examined Life in Edition #46 of the newsletter. This is a long-lived podcast, and it has remained in my listening list since my discovery of it. It’s a fantastic show that as they say, “strip mines classic texts” of philosophy in an attempt to grasp some of the finer concepts of philosophical teachings.

Reading and interpreting philosophy texts in public for well over a decade, one of the hosts, and the subject of my interview, Mark Linsenmayer has developed a refined style that I rather enjoy. Because of the longevity and success of this podcast, I thought it would be interesting to talk to the person behind it.

Here’s my interview with Mark Linsenmayer. 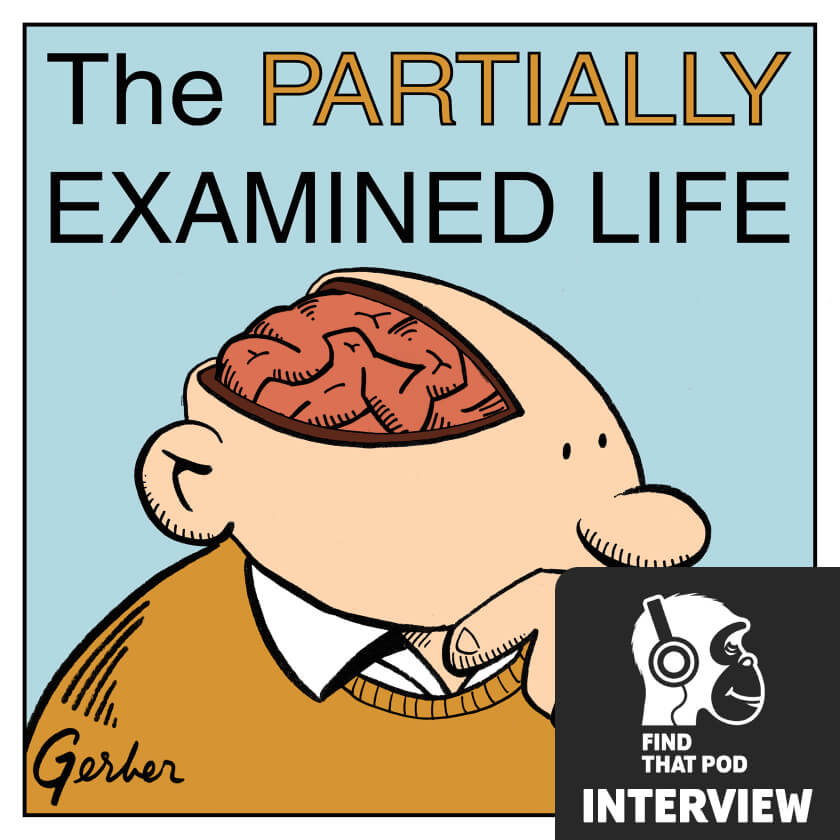 Tell me what makes The Partially Examined Life different from similar podcasts?

Mark: Philosophy podcasts tend to be either a lecturer reading prepared speeches or an off-the-cuff discussion. We do a discussion after we’ve all read a specific text, with an eye to both explaining what we got out of that text to listeners who did not read it and also trying to cooperatively connect the subject matter to the real world and our ongoing theorizing about it.

Why did you start this podcast?

Mark: We were ex-grad-student former classmates who wanted an excuse to re-read some classic texts with some degree of objectivity and remove resulting from our being out of academia for a while.

Tell me about your process and the things that go into producing each episode.

Mark: We pick a text based on our current interests and listener recommendations. We often look for online syllabi to figure out which parts are most important to read (preferably not more than 50 pages). We take extensive notes and often look at the relevant Stanford Encyclopedia of Philosophy article or other online sources. We talk for a couple of hours, each recording our voice locally (with backups both going to one of us and to the cloud). Our editor mixes and cosmetically edits the tracks, then I do a pass for any substantial content edits (which are rare) and to cosmetically clean things up a bit more. We release episodes in full to our supporters and split in half to the general public.

Mark: Good editing is important to make an improvised product like this listenable, so figuring out the right balance of editing (not too much so as to make it sound mechanical, but enough so it doesn’t get boring) was challenging, as was working out how to sustainably do it, as it’s a lot of effort. I started doing it all myself but quickly pulled in my fellow podcasters, then was lucky enough to get listeners who would help us for cheap or free, and eventually, one of them (Tyler Hislop) took over the whole operation.

Mark: There are four hosts, so we’re all going to have different answers. I feel the strong need to create, and because this connects to so many people, it’s as satisfying or more so than the various writing and musical projects I’ve done. We’ve been able to get enough listener support and ad revenue to gain some freedom to not just work full time (though half of us still do that), so having that extra income to be able to spend more time creatively has been key for me.

Mark: We’ve been doing this for 11 years and have already seen a lasting impact, in expanding the role of public philosophy and inspiring many other similar endeavors. I somehow doubt that people will still be listening to this show years after we stop doing it, but I hope I’m wrong.

Mark: I directly emailed philosophy graduate students in bulk after we had several months’ worth of episodes, encouraging them to check it out and share them as a study aid to their students. I’m lucky enough to have a relative who runs openculture.com and was able to write a blog post for them, which then got noticed by someone at iTunes who reached out to feature us, which was the single act that made the most difference. We try to network with others in the space, having them on our show, appearing on other shows when asked. We’ve brought on celebrity guests, but haven’t noticed that those episodes get downloaded substantially more than any others. I created our spin-off pop culture and music podcasts in part to connect with new groups of listeners who we could then lure back to listen to philosophy. (I don’t know that this has had a substantial impact.) We mostly now just market to our current audience via social media and trust that those networks, as well as people browsing in iTunes among the top philosophy podcasts, will bring in more people at a steady rate.

We’ve found it very difficult to find new audiences with our spin-off podcasts. We’re lucky that philosophy is a distinct sub-topic on iTunes and that there was an identifiable academic community to reach out to.

Mark: Create a podcast because this is something you want to have conversations (or do interviews, or read what you’ve written) about, not out of any expectation you’re going to find a really substantial audience. Even if you’re talking to 200 people, that’s still so many more than would ordinarily be listening to your thoughts, and you should never take that for granted.

If you are really interested in an audience, think like a journalist: Provide a strong reason right up front for people to keep listening after the first few minutes. After you have them hooked enough to develop a personal relationship, then you can go off on casual chit chat and other tangents, but there’s no reason you should think you’re so innately charming that people will be initially motivated to hang on your every word.

Relatedly, please edit your podcast. No one needs to hear your hemming and hawing and umming and uhhing. If you’re serious enough to think your words are worth recording, then they’re worth polishing in post as well, and it’s not that difficult to gain some basic editing skills by looking at online sources and maybe talking to some other podcasters about it.

Mark: Both. People with time on their hands have discovered this form, and there’s no reason to think millions of flowers won’t keep blooming in every niche. After a certain point, it’s difficult to justify continuing to give your time to it without remuneration, and the podcast advertising game is only profitable for very popular podcasts, so I think most podcasts need to at least consider walling off some content while keeping enough free to keep attracting new listeners.

Mark: Sorry to be self-indulgent, but I need to plug our network podcasts:

Pretty Much Pop: A Culture Podcast (http://prettymuchpop.com/) tries through collaborative discussion after review of online articles to make sense of our position as entertainment consumers, considering genres, tropes, franchises, political issues, and more regarding film, TV, music, fiction, comedy, and any other way we amuse ourselves.

Nakedly Examined Music (http://nakedlyexaminedmusic.com/) interviews songwriters/recording artists about their specific songs, which are included in full as part of the podcast, getting deeply into their techniques and motivation.