Interview with Ryan Sprague of Somewhere in the Skies

By Sebastian ArciszewskiJune 8, 2020No Comments
5 New Podcasts To Listen To Each Week - Subscribe to Find That Pod

Ryan Sprague is the host of Somewhere in the Skies, a podcast I featured a while back in the newsletter. His show is easily one of the best and most intelligent explorations of the UFO phenomenon along with other paranormal and downright weird occurrences from around the world. He’s also the lead investigator and co-host of the CW television series, Mysteries Decoded.

With the recent revelations and UFO video released by the U.S. navy I wanted to ask Ryan about his experience with running the Somewhere in the Skies podcast. He told me about what he hopes its impact will be and his advice for podcasters that are just getting going. Here’s my interview with Ryan. 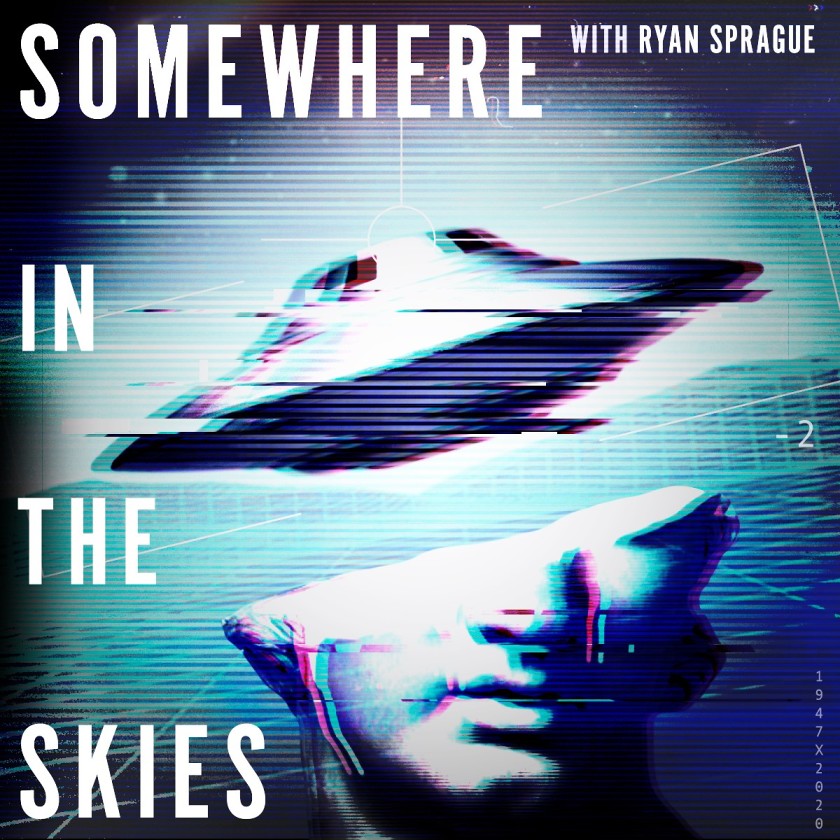 Tell me what makes Somewhere in the Skies different from similar podcasts?

Ryan: There are some really awesome podcasts out there that cover UFOs and the paranormal, but what I think makes Somewhere in the Skies truly stand out is the inclusiveness of those who have seen a UFO or experienced something strange. I dedicate a large portion of the show to those who feel comfortable coming on and telling their stories in their own words. It’s far more powerful than a host relaying a story with no true frame of reference. I also really like to invite broad perspectives and opinions on these strange topics. So rather than promoting an echo chamber-like atmosphere, I like to shake things up and bring on people in all walks of life to discuss their thoughts on UFOs from whatever lens they choose to view it from. It’s very refreshing for listeners, and honestly, for me as well.

Why did you start Somewhere in the Skies?

Ryan: The original intent was to be a continuation of a book I wrote in 2016 under the same title. I felt like there was still so much more I wanted to say and so many stories that I simply didn’t have room to fit into the book. And at the time, I’d been a contributor and co-host of another fringe-filled podcast called Into the Fray, hosted by Shannon LeGro. LeGro was essential in helping guide me in the early days of how to start a podcast from a production standpoint, and I honestly never would have taken the leap without her support. And almost two-hundred episodes later, I still consider her my Obi-Wan Kenobi of podcasting.

Tell me about your process and the things that go into producing each episode?

Ryan: Its episode is its own beast in many ways. If it’s a straight-up interview-style episode, I usually read whatever book I mainly want to cover with an author or a certain topic I want to discuss with a researcher. This usually consists of a crash-course in the topic, speed-reading, and creating a blueprint of what I’d like to cover. I will often send the blueprint to guests ahead of time in case they wish to prepare any answers. But of course, the conversation always veers into uncharted territories, so as a host, you become more of a guide or navigator than an interrogator. If it’s an audio documentary-style episode, these usually take me months to produce. From research, to writing a script, to hiring actors here in New York City to voice much of the quotes I’ll use throughout, it takes a while… but the payoff is so rewarding. I am a playwright and screenwriter when I’m not researching UFOs and podcasting, so it’s been an exciting way of mixing my worlds together. I will often send episodes to fellow podcasters to get feedback before releasing, and I’ve found that to be very beneficial as well.

Ryan: The most challenging aspect of the podcast would have to be trying to remain fresh, engaging, and passionate. And while it’s a challenge, it truly is easier if you actually care about the material you’re covering rather than trying to just produce content. I hold myself to pretty high standards, and with a weekly show, I can admit it is hard to constantly stay on top of things. So I will try to map out my entire month of content and always try to be at least a few weeks ahead. Also, with an ever-evolving topic of UFOs in the mainstream now more than ever, it is a story developing at a constant rate. So I will sometimes have to re-arrange episode releases or go back in and make changes that are relevant to the current state of the discourse and conversations occurring. UFOs are always a step ahead of us, and I try to do the same with the coverage of the topic.

Ryan: The show is a very personal endeavour. While I enjoy feedback and appreciate every last stream or download… at the end of the day, I do the show to satisfy my own curiosity. I learn something new every single episode, and I can only hope listeners will do the same as they take that leap and that journey with me.

Ryan: I think every creator wants their work to be remembered. No matter what medium you work in, we call hope that we leave a lasting impact on the world someway and somehow. The glory of the digital age is that our voices can now be heard anywhere, any time, and by anyone. And even as the world changes, we will have these stories and this platform of podcasting to immortalize our work. Of course I hope my show will have a lasting impact. And I know it sounds cliché, but if I can open the eyes, minds, and hearts of one person who never thought twice about UFOs and their cultural impact on society, then I feel like I’ve made a difference and contributed to a topic that has fueled my own life for so long.

Ryan: The podcasting community is by far the most supportive community I have ever been a part of. The support by fellow podcasters (this interviewer included) shows how it was a world of media built from scratch and based on an unspoken rule of building one another up instead of tearing one another down. So my suggestion is to find other podcasters, and ask to be a guest on their show. Get the word out on your work, and ask to swap ads or promos. It’s not about getting a million downloads overnight. It’s building a listenership through communication. Interact with your listeners, whether on social networks, or even on the show. The stronger your community, the more they will trust you and the more you can trust them to spread the word. Lastly, listen to your listeners. They are there for a reason, and you have to know what that reason is, and how you can make it grow.

Ryan: Have a clear idea of what the podcast is going to be about. Everyone and their mother has a podcast. But if you ask what it’s about… 50% couldn’t give you a one-liner about it. Also, it’s a very gradual process of gaining a listenership. Don’t get discouraged if you’re not Joe Rogan overnight. If you really want it to work, you HAVE to treat it like a job. It takes time, effort, and a lot of sacrifice. Those who don’t make it past episode 10 clearly didn’t realize how much work truly goes into it. You have to really love what you do and let that be your constant reminder as you climb.

Ryan: Both. I think the beauty of podcasting is the openness of the platform. Content creators can offer as much free content as they want. And then they can offer paywall content. Podcasting ain’t free to do or to create, so you can never blame creators for asking for donations, or to charge for extra content. It’s a way of thanking the creator for all the hours of free content they provide weekly, if not even daily by some. And while you see large companies buying up creators and their content (Joe Rogan and Spotify for example) to put behind a paywall… I think it’s a push and pull. The big companies introduce podcasts to the mainstream, and the hope is that it will trickle down to independent podcasters and smaller networks. At the end of the day, the podcasting platform belongs to the listeners. It always has. No large company or corporation can thrive in the medium if nobody is listening. So we may see some of them just give up. Or we will see them succeed and completely destroy this amazing and exciting medium… only time will tell. In the meantime, I use the big guys/gals to fuel my own creativity.

Reply All hosted by PJ Vogt and Alex Goldman – A awesome exploration of modern-life in the age of the internet.

Our Strange Skies hosted by Rob Kristoffersen – This is a completely original podcast centering on UFOs expertly researched and presented by a host with a clear passion and curiosity for the UFO phenomenon and the culture that has sprouted from it.