Interview with Jacob Mchangama of Clear and Present Danger

By Sebastian ArciszewskiSeptember 14, 2020One Comment
5 New Podcasts To Listen To Each Week - Subscribe to Find That Pod

Jacob Mchangama is the founder and executive director of Justitia, a think tank focusing on human rights. He also happens to be the host and creator of Clear and Present Danger, a podcast about the history of free speech which I featured in  Edition #52 of the newsletter. Jacob is a fascinating figure and has dedicated much of his professional career to this topic. His answers in this interview lay an interesting story behind his inspiration for this fantastic podcast.

Here’s my interview with Jacob Mchangama. 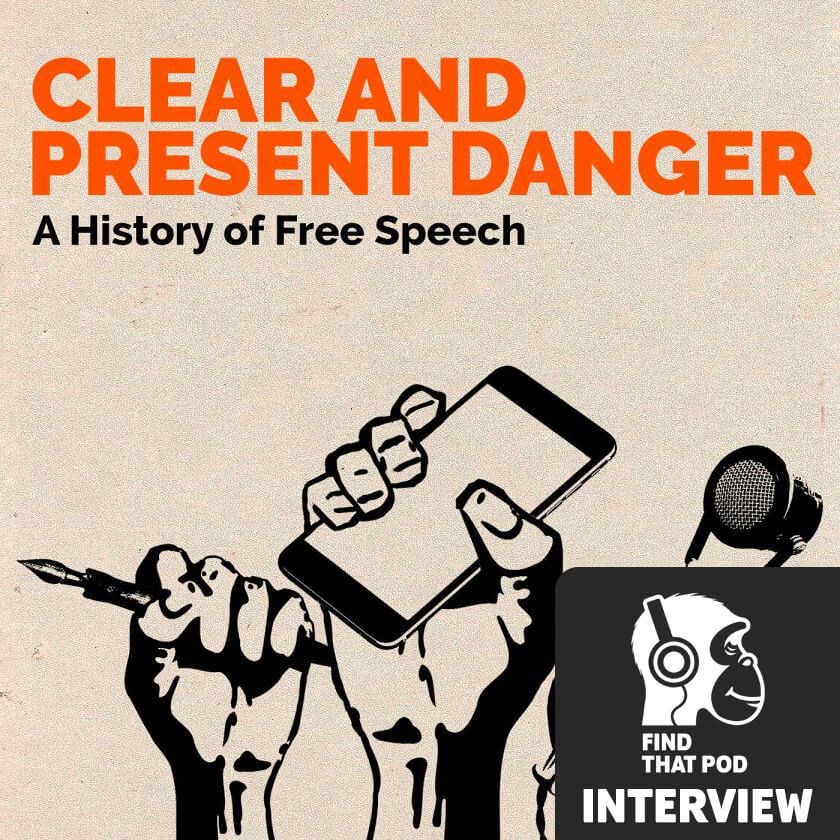 Tell me what makes Clear and Present Danger different from other history podcasts?

Jacob: I guess the history of free speech is both a very narrow and abstract topic compared to, say, the history of Rome, or a specific campaign of World War II which makes it more challenging to narrate a coherent story, but hopefully the listeners can connect some dots between events, say, in the Athenian Democracy and in the digital age. That at least is the purpose.

Why did you start this podcast?

Jacob: Free speech has been the focal point of my professional career for the past 10-15 years or so, but before that, I didn´t give this principle much thought. Born in Denmark in 1978, I was raised in one of the most free and open democracies in the world at a time when liberty seemed like an unstoppable force. I was 11 when the Berlin Wall came tumbling down and had just entered my teens when the Soviet Union suddenly disappeared from the map. When I graduated from law school in 2003, the idea and practice of free speech were spreading to all corners of the world in a continuous positive feedback loop, and censorship seemed doomed to obsolescence.

But it was not until cozy, liberal Denmark became the epicentre of a global battle of values over the limits of free speech that I started really thinking long and hard about this liberty that I had thus far taken for granted. In 2005, the Danish newspaper Jyllands-Posten published cartoons depicting the Muslim prophet Muhammed, setting in motion a chain of explosive events with aftershocks that still rock the world from time to time. The ensuing debate over free speech left me perplexed by the incoherent and opportunistic positions that people on both sides of the argument often advanced. Support for or opposition to free speech seemed to depend on whether that right benefitted a group’s underlying ideology or agenda. Free speech had been developed as a win-win situation in which people with diverse ideas could live together despite their differences and even learn from each other. Yet it was somehow evolving into a zero-sum game of winner takes all: “Free speech for me, but not for thee.” I also found that many of the arguments embraced by either side relied on little more than tired clichés, memes, and slogans. Few seemed interested in exploring the deeper significance of free speech. I include a lot of my own earlier writings in this category. Sadly, the cartoon crisis was merely the opening salvo of a global assault on free speech that has lasted more than a decade, affecting all continents and regime types. The mood of free speech triumphalism has shifted to one of defensive rearguard action. So I really wanted to understand why free speech matters, how this idea has been developed and become entrenched in democracies so that I myself would have a firmer grasp of if and why the principle that I kept insisting was so important really was so important. Obviously I also hope that the listeners will benefit from the podcast not least when in current debates about free speech they feel tempted to say, free speech is important BUT, in this case, an exception should be made.

Tell me about your process and the things that go into producing each episode.

Jacob: Lots and lots of reading and research. The last episode on free speech and racial justice included a word document of more than 80 pages of notes and a bibliography of almost 6 pages, so I really try to dive deep into both historical articles and books by specialists as well as more popular sources and then synthesize my findings and superimpose my interpretation on top. But I have also profited from the help of numerous experts and specialists who without any obvious benefit have agreed to read or listen to draft episodes of the podcast and then provided invaluable feedback. That has really been a huge help, not only because experts can point out flaws, but also because once you find a formula where the feedback is mostly positive and few glaring mistakes are pointed out you gain confidence in your method. I must here highlight Cambridge historian Paul Cartledge who is one of the world´s eminent experts of Ancient Greece. He not only listened and gave a blurb of the podcast, but he also agreed to an interview for an Expert Opinion and has listened to just about every episode since providing encouraging feedback. I have really been astounded by the generosity of Paul in spending so much time on a person with no credentials in a field that Paul has spent his whole life researching and writing on. I´m not sure I would have been so approachable and charitable if I had the standing and stellar record of Paul.

Jacob: As a non-historian, it is quite nerve-wracking to suddenly thrust oneself into, say, the history of Ancient Athens or the Mughal Empire, which is necessary to get the context for the developments I describe right. That requires humility and patience in finding multiple sources and getting the underlying story right.

It´s also difficult to settle on the right format. Everyone would love to be Dan Carlin or Mike Duncan, but trying to copy their distinct styles is unlikely to be successful, so you have to find your own voice and format while obviously tweaking things as you go along and become wiser on what works and what doesn’t.  Time is obviously a  huge factor. When I first pitched this idea to the Foundation of Individual Rights of Education (FIRE) who sponsor the podcast, I imagined that the podcast could be completed in six months with a weekly episode lasting 20-40 minutes. That turned out to be quite naïve. The editing alone often takes almost a week and is not even done by me. The amount of research that goes into every episode also makes a weekly episode impossible and I even have a research assistant who provides invaluable help and an editor in charge of the technical side.

Jacob: For me, the exploring the global history of free speech in depth from antiquity until today has been incredibly enriching. Especially since – as far as I can tell – no one has really done so before. I´d like to think that my perspective on free speech has become much more nuanced and my understanding of this principle much deeper. That is obviously also what I hope the listeners will take away from the show. As for all podcasters, positive feedback and engagement from listeners is the dopamine that keeps you going.

Jacob: Very much so. Free speech is likely to be a principle that continues to give rise to heated debate not only in the foreseeable future but also farther down the road, as the show has demonstrated. So I very much hope that those interested in really understanding this principle will stumble upon the podcast and find it an enriching resource. Hopefully, many of the episodes will be as relevant in 50 or a hundred years from now as they are today.

Jacob: I obviously promote the show across social media platforms both my own and that of the podcast itself. FIRE also do a lot of work promoting it on their blog and SoMe channels.  I also use content from the podcast when I write articles and opeds in outlets such as Foreign Policy, Economist etc. I have also been lucky that intellectuals like Steven Pinker, Jonathan Rauch and Greg Lukianoff have been consistently mentioning and recommending the podcast online.  I´m also close to finishing a book based on the podcast which I hope will be published in 2021 and increase interest in the podcast itself given that the book cannot provide as much detail as the show.

Jacob: Be clear about what you want to do. Listen to other podcasts before starting out. Make sure you have the stamina to keep going even when there are few listeners and no engagement. Expect to spend WAY more time on the show than what you initially imagined. Treat other podcasters the way you want to be treated.

Jacob: I imagine that there will be space for both models and that niche podcasts – such as most history podcasts – will be freely available to the public while those who manage to generate a huge following can try to monetize their products through various models such as Patreon etc.

Mark: Every history podcaster should go back and listen to Lars Brownworth´s podcast 12 Byzantine Rulers which really marked the breakthrough of history podcasting. I also have to admit that I´m a sucker for Hardcore History, keeping your listeners hooked for six four-hour long episodes in a row is really a spectacular achievement. Far removed from history podcast I have to give a shout out to the iconoclastic Fifth Column Podcast where I have been fortunate to be a guest before they really made it to the big league of podcasting.