By Sebastian ArciszewskiJune 22, 2020No Comments
5 New Podcasts To Listen To Each Week - Subscribe to Find That Pod

This week I had a chance to speak with Kinsey Grant of the Business Casual podcast. Business Casual is an off-shoot of the incredibly popular Morning Brew email newsletter which is now delivered to over 2 million inboxes daily. Morning Brew’s unique style has won it acclaim in the business world and part of that style was formed by Kinsey, who started off as a writer with Morning Brew in 2018.

Here’s my interview with Kinsey: 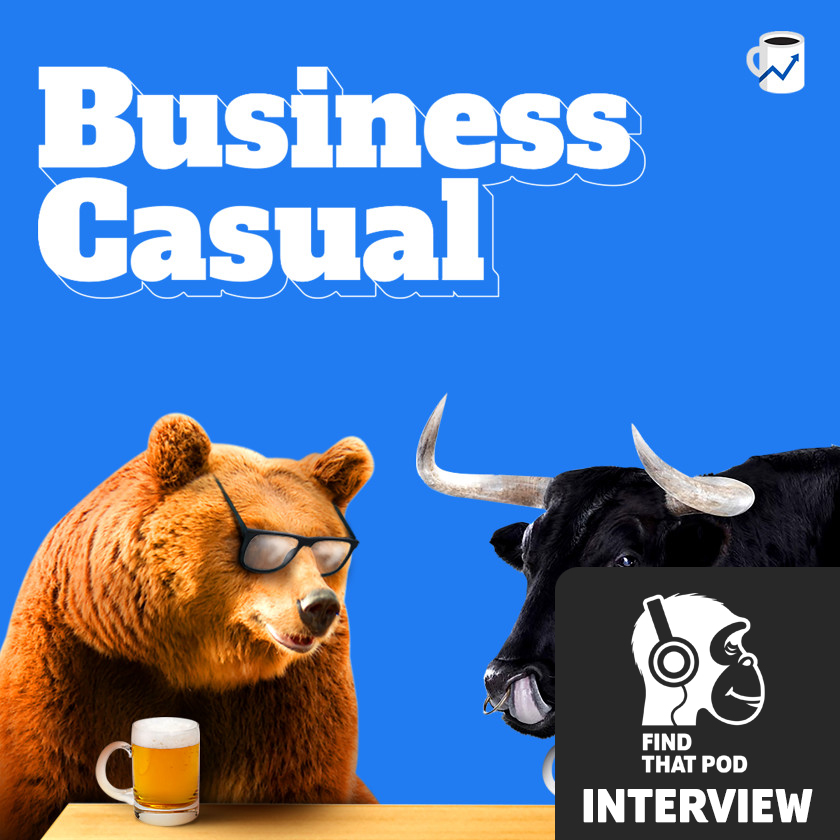 Kinsey: Morning Brew spent the better part of five years as a newsletter-first company, an effort that afforded us a highly engaged, extremely loyal audience. But to us, there was a way to meet that audience in a new capacity via an audio product. We wanted to make sure the show that eventually became Business Casual could offer something more or something deeper than what was already available in our daily newsletter. That brought us to the idea of Business Casual—answering the biggest questions in business with the biggest names in business. The newsletter is brief, a bird’s eye view if you will. The podcast became a product that digs deeply into one subject, offering our listeners the kind of insights we wish we had space to put in the newsletter. It was also important to us to capitalize on what makes Morning Brew so good—the delivery. I spent almost two years trying to master that Morning Brew tone as a writer, so we were set on replicating that engaging, entertaining, informative voice in the podcast.

By now, podcasting has sort of become the new blogging. And perhaps we see newsletters slowly entering that same ubiquity soon with the advent of services like Substack. That said, with a tremendous deal of competition in the business podcasts space, what would you say makes Business Casual unique?

Kinsey: We didn’t launch until we had something different to say. To me, part of the issue with podcasting is that everyone wants to replicate shows that are already successful without putting in the work to determine what that success story isn’t bringing to the table. I think what makes us unique is that we thought long and hard about whether we’d just be shouting into the void before we greenlit the project. We ultimately decided that we did have something new to say, and more importantly a new way to deliver it. If you listen to the show from episode one, you hear us get better—part of our value proposition has always been transparency. I’m asking questions you might also ask if you were in my shoes. That notion of relating to a host who’s talking about things that are relevant to your life has helped us carve a niche.

What’s the back-story of how you came to be the host of Business Casual?

Kinsey: I have a background in multimedia journalism after spending most of my college career focused on broadcast work. When I joined Morning Brew as a writer in 2018, I made it clear that I loved multimedia and wanted to be involved in any video and audio projects. Once we decided the time was right for a podcast, I helped develop the show strategy and it eventually became clear that I would be equipped to host, too. Having spent a long time at that point writing for the newsletter, I was deeply familiar with the creative style that makes Morning Brew successful, so I felt comfortable replicating it for audio.

Tell me a bit about your process and the things that go into producing each episode?

Kinsey: How many hours do you have? I’m kidding, but it is a pretty involved process from ideation to release. My team right now is me, my producer Marilyn Haigh, and my product manager Josh Kaplan. The three of us are in near-constant communication about ideas for upcoming episodes, other podcasts we admire, amazing guest ideas, etc. In weekly pitching and brainstorm meetings, the three of us decide what to greenlight and what to table. Once an episode is greenlit, we book the right guest and begin the prep process. I’ll develop a story arc for the episode and send a loose outline to the guest about a week before we record so the guest has a better idea of what I’d like to focus on in the conversation. Then, I go into a deep prep process in which I essentially attempt to learn as much as possible about both the topic and the guest, which usually takes several hours. Then we record for about 90 minutes, my producer cuts it down to 40 or so minutes, and a freelancer edits and cleans up the audio. Once we have a finalized episode, I write the copy that goes with the episode in show notes and elsewhere. We’ll brainstorm as a team to consider possible social promotion like a Live on Instagram or Twitter, or if it’s a big guest, top billing in the Morning Brew newsletter. Then the episode goes out and we talk the heck out of it online. And then start all over with another episode!

What have been the most challenging aspects of producing the show?

Kinsey: Booking guests can be tough—it’s gotten easier since the show has grown, but it sometimes feels like we’re constantly pitching ourselves.

Kinsey: I truly feel like I’m getting my MBA in these interviews I get to do. The show has afforded me unimaginable access to the kinds of people I used to dream about talking with. I do it because I love doing it…but also because I love the lessons I’ve learned along the way. It’s not lost on me how lucky I am to connect with this many successful people and get paid to do it.

Do you ever think about the lasting impact of your podcast? What would you want it to be?

Kinsey: If nothing else, I hope our show encourages people to think differently. We take on thorny subjects, but we’ve never been interested in changing minds. We just want listeners to learn something that challenges their worldview. To me, that would be success.

You’ve now had the opportunity to interview some giants of the business world including Ray Dalio, Arianna Huffington, and Mark Cuban amongst others. What’s that been like?

Kinsey: Unreal. And the best part is that so many of our past guests are willing to stay in touch with our team for future projects. People are more willing and generous with their time than they’re sometimes given credit for. It’s been encouraging to see.

Has COVID-19 had an impact on the show? Has it made you rethink about what the most important questions in business are?

Kinsey: Absolutely. It changed just about all of our content plans starting in March, but it also made us a better show. It was the rapid pace of COVID news that made us ramp up to 2x a week way before we initially planned to. And on an episode basis, it certainly diverted our content and attention…it was a completely universal story. No part of the business world wasn’t affected. How often does that happen?

Kinsey: Understand your niche. What are you doing that no one else can? Whatever that is, steer into it hard. And second, talk to your audience, talk to other podcasters, talk to listening platforms—talk, talk, talk. It’s never going to hurt to get another perspective.

What do you think the future of podcasting holds? More walled gardens like Spotify and Luminary or open RSS feeds?

Kinsey: I remain bullish on premium podcasting, but I don’t think it’s being done right today. To me, premium news (like The Atlantic or the NYT) takes a long time to become something people are willing to pay for—they need to be completely convinced they’re at an advantage if they pay for it. Right now, there aren’t that many podcasts achieving the same caliber of content. I think it’s an inevitable move, but I think there are still years between today and premium podcasts becoming the norm. More generally, I’m heavily invested (at least theoretically) in audio as a medium. There’s something to be said for the longevity of radio—and to me, podcasting takes it one step further by establishing a stronger one to one connection than terrestrial radio ever could.